Tomatoes are one of the most popular and cultivated edible plants.  It is almost impossible to find a household where tomatoes are not consumed at all.  However, it was not always the case through the history.

Tomato is an edible plant that is cultivated for its tomatoes.  There is a huge debate going on whether tomato is a fruit or a vegetable.  Botanically it is a fruit – “a berry, consisting of the ovary, together with its seeds” (Wikipedia).   In the grocery store tomatoes labeled as vegetables due to the taste, use and nutritional purposes.

Tomatoes are rich in Vitamin A and C and many other important vitamins and minerals.

It is believed that plant originated from what now is Peru and Ecuador and it is still possible to find wild tomato plants in Andes Mountains.   The Nahuatl (Aztec language) word tomatl (the swelling fruit) became today’s tomato.  The exact date of domestication of the plant is not known, however it is known that by 500 B.C plant was cultivated in Mexico.

Tomato was introduced to Europe in around 16th century by the Spanish, probably after Columbus discovered America.  At first tomato was grown as an ornamental plant. It was also considered poisonous as indeed roots and leaves of the plant contain poisonous neurotoxin solanine.  Also the legend goes that tomatoes were served for the richest in Europe in dishes made out of pewter.  Acid from tomatoes licked lead out of expensive plates thus poisoning people.  That is why tomatoes were also considered poisonous and were not consumed for almost 200 years after being originally introduced to Europe.

It is believed that it was Italians who adopted plant as a food.  Italians called tomato pomodoro (golden apple).

Tomatoes were introduced back to North America as food by travelling Europeans in around 18th century. It did not attain its popularity in the United States until the early 20th century.  Now days, tomatoes are widely used and commercially grown throughout the world.

When I planted tomatoes for the first time this year, I did not really expect anything to grow out of my plants.  However, surprisingly, all six of them survived and produced huge number of tomatoes.

Considering that there is only one person in my family who likes tomatoes, utilizing them became somewhat an issue.  I mean, there is only so much of tomato sauce you can make and store.

That is how I ended up with a delicious homemade tomato soup.  I cooked chicken broth myself from scratch and that also contributed to a very rich flavour.  All vegetables and tomatoes were baked and that gave this soup such unique smoky flavour.

1 chicken leg (or any other part of chicken with bones)

Wash chicken leg and place it in a large pot.  Add around 1 L of water, bring to boil, reduce heat to low and cook for about 45 minutes.  Add salt and pepper to taste.  Remove chicken leg out of broth and let broth cool down.

Sprinkle oven tray with olive oil, place tomato halves, onion rings and cleaned garlic cloves.   Place in the oven pre-heated to 390F for about 30 minutes or more (depending on your oven).  Tomatoes should be completely soft.

I figured out the best way to roast vegetables in my oven.  I road staff half way through on “Bake” settings and then turn it to “Broil” on low settings for the remaining of the cooking.  This way I get nice crispy roasted goods.

Take tray with tomatoes out of the oven and let cool completely.  Tomatoes will release a lot of juice and will decrease in size dramatically.  Pick off tomato skin and discard.  Add roasted tomatoes together with juice from the tray to the pot with chicken broth.

Taste your soup.  I found that my soup was to sour as tomatoes naturally give out rather sour taste.  I ended up adding about 1 or 1 1/2 table spoon of sugar and it made soup to taste very delicious and not sour at all. 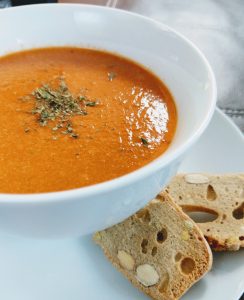 You could also add parmesan cheese and basil to your liking. 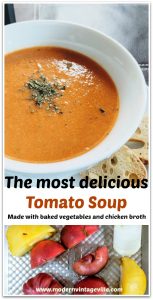