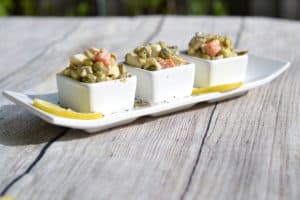 Olivier  salad is a very delicious potato salad popular among former USSR citizens and Russian community all over the world.

The invention history of the salad is stated in Wikipedia:

“The original version of the salad was invented in the 1860s by Belgian Lucien Olivier, the chef of the Hermitage, one of Moscow’s most celebrated restaurants. Olivier’s salad quickly became immensely popular with Hermitage regulars, and became the restaurant’s signature dish.Olivier cooked by recipe of Hermitage restaurant

The exact recipe — particularly that of the dressing — was a jealously guarded secret, but it is known that the salad contained grouse, veal tongue, caviar, lettuce, crayfish tails, capers, and smoked duck, although it is possible that the recipe was varied seasonally.

The original Olivier dressing was a type of mayonnaise, made with French wine vinegar, mustard, and Provençal olive oil; its exact recipe, however, remains unknown.

At the turn of the 20th century, one of Olivier’s sous-chefs, Ivan Ivanov, attempted to steal the recipe. While preparing the dressing one evening in solitude, as was his custom, Olivier was suddenly called away on some emergency. Taking advantage of the opportunity, Ivanov sneaked into Olivier’s private kitchen and observed his mise en place, which allowed him to make reasonable assumptions about the recipe of Olivier’s famed dressing. Ivanov then left Olivier’s employ and went to work as a chef for Moskva, a somewhat inferior restaurant, where he began to serve a suspiciously similar salad under the name “Capital Salad,” (Russian: Столичный, “Stolichny”). It was reported by the gourmands of the time, however, that the dressing on the Stolichny salad was of a lower quality than Olivier’s, meaning that it was “missing something.”

Later, Ivanov sold the recipe for the salad to various publishing houses, which further contributed to its popularization. Due to the closure of the Hermitage restaurant in 1905, and the Olivier family’s subsequent departure from Russia, the salad could now be referred to as “Olivier.”

One of the first printed recipes for Olivier salad, by Aleksandrova, appearing in 1894, called for half a hazel grouse, two potatoes, one small cucumber (or a large cornichon), 3-4 lettuce leaves, 3 large crawfish tails, 1/4 cup cubed aspic, 1 teaspoon of capers, 3–5 olives, and 11⁄2 tablespoon Provençal dressing (mayonnaise).

As often happens with gourmet recipes which become popular, the ingredients that were rare, expensive, seasonal, or difficult to prepare were  gradually replaced with cheaper and more readily available foods.” 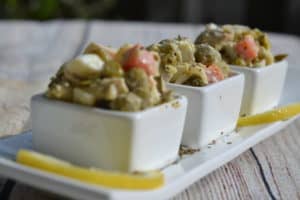 Ingredients are quite simple.

1 can of sweet peas

4-5 middle sized dill pickles (garlic flavour is my favourite; do not use sweet pickles), chopped in small pieces

300-400 grams of baby bologna, diced (however, you can use any meat of your liking; I personally prefer cooked/smoked chicken breast.  If you are aiming for a healthier option, then use baked chicken breast)

about 1/8 of middle size white onion, chopped  (I personally do not like the onion taste but I do agree that this salad tastes better with some onions in it.  In this case I dice onion in very, very small pieces, and pour boiling water over them, let onion cook for 1 minute and discard the water.  This method takes away the strong onion taste and smell, but still gives salad a very nice taste.  This step is totally OPTIONAL)

In a large bowl mix together diced potatoes, eggs, bologna (chicken), pickles, onions, carrots.  Open can of peas, drain water, add to salad.  Sprinkle over some lemon juice.  Add mayonnaise and mix.  Add salt and pepper to taste.  Cover bowl with a plastic wrap and chill in a refrigerator for at least 30 minutes.  Enjoy. 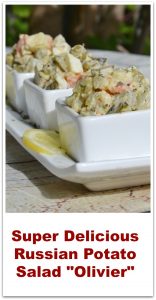