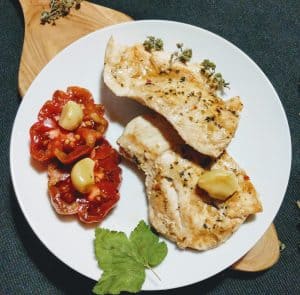 Few years ago a friend of mine said that she received tagine  as a present for one of the occasions.  She boasted how food was turning out to be so delicious and juicy and how easy it was to cook using this dish. At the time the whole concept of cooking in a clay dish using ordinary electric stove seemed kind of weird, for some reasons.  In addition, tanginess that I was able to find were quite expensive and I could not afford one at the time.

Few month ago I came across a cute terracotta tagine in one of the local stores and it was so cheap (only $25 Canadian comparing to prices of $100+ that I’ve seen before).  Needless to say I bought one not even knowing how to use is or what tagine even is. 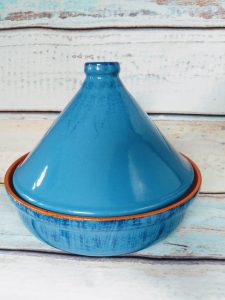 The word refers to two meanings:

Traditionally tagine is placed over charcoals for cooking.  Now days it is placed in the oven or over gas or electric burner.  It is advisable to buy a heat diffuser if you decide to cook over the burner.  Diffuser is a circular utensil placed on top of a electrical or gas burner; it allows heat to distribute evenly.  I use my tagine in the oven only.

Uniquely designed cone or dome allows all condensation to return from top to bottom thus locking all moisture and flavours in place.

2.The word also means stew-like dish that is cooked in a tagine.  Meat, poultry, fish, beans, vegetables and fruits are used in the stew.

I was sceptical in the beginning as I could not understand how cooking in tagine is different from cooking in a slow cooker.  Well, I still do not know the difference, but I have to admit that food cooked in this Moroccan dish does taste different and unique.  Maybe it is terracotta, maybe it is special dome-like design that allows for food to be prepared in a certain way, but food cooked in tagine does not taste the same as food prepared in the slow cooker or pressure cooker (yes, I have both :)) .  It has way richer and unique flavour.

There are many different recipes specific for tagine. I did not follow any, just created my own and by any means I do not pretend that this is how food in tagine is supposed to be prepared.

I found a very good website with tones of authentic recipes, I am planning on cooking some dishes from the website.  Check out the following link https://www.bbcgoodfood.com/recipes/collection/tagine .

If you are using Pinterest, I also created a special board full of tagine recipes.

I also would like to share two quick and easy recipes of dishes cooked in tagine.  They do not follow any culture, I just made them up on a go.

2-3 cloves of garlic cut in halves

Cut fat off the chicken with scissors.  Add Kalibi sauce and marinate for about an hour in a bowl. 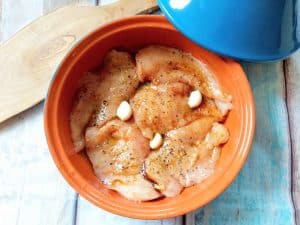 Add olive oil, onion and place chicken on the bottom of your tagine.  Place garlic, salt and pepper on top of the chicken.  Add about 1/2 cup of cold water.

Place tagine in the cold oven.  Turn heat to 380F and let cook for about 1.5 hours.  I do not open  the oven and do not check on the food.  Remove from oven.  Serve chicken over a bed of rice, beans, mashed potatoes.

Pork with Turmeric in Tagine 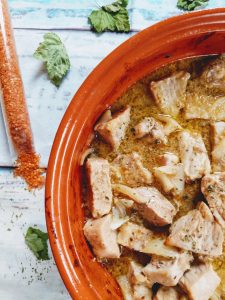 Half of small onion (diced)

1/2 cup of rice (cleaned and drained)

Sprinkle bottom of tagine with olive oil, place rice and even it out.  Press few cloves of garlic into rice.  Place diced onion on top of rice.  Season with a bit of salt.  In a separate bowl mix pork pieces, turmeric and olive oil and place over rice.  Add about 1 cup of cold water.

Put tagine into cold oven, turn heat up to 380 F and cook for about 1,5 hours.  About half way through carefully remove tagine and check on the dish if it requires more water.