We continued our road trip around Finger Lakes, New York 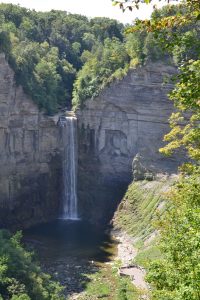 We packed out tents and all camping stuff and headed to Taughannock Falls State Park (2221 Taughannock Park Rd. Trumansburg, New York 14886). Taughannock falls carves a 400ft deep gorge through layers of sandstone, shale and limestone that were once the bed of an ancient sea. With a 215 foot plunge, this waterfall stands three stories taller than Niagara Falls.

You will have to pay $8 per vehicle entrance fee, but this ticket is valid for any US state park for that day.

There are 3 major trails in the park:

•Gorge Trail: 0.75mi along Taughannock Creek to the base of the falls. 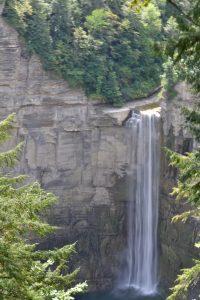 There is a lookout point at the entrance of the park where you can overlook the gorge itself and an amazing waterfall.  No swimming is allowed in gorge; dogs are allowed on the trail when on leash.

Across the falls there is a very big and nice park where you can enjoy swimming in Cayuga Lake, picnic area and kids playground.  As was mentioned earlier, once you paid to enter Taughannock park, you can you the same ticket to enter this park.

It took South Rim Trail and then explored Gorge trail; and then had lunch next to Cayuga Lake. 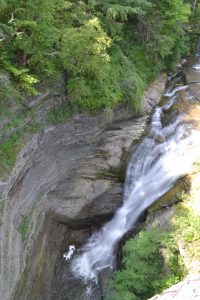 We arrived to Ithaca around 4 or 5 pm and decided to stay at Ramada Inn (2310 N Triphammer Rd, Ithaca, NY 14850, USA).  We did not really make any bookings prior.  We just searched tripadvisor, read some reviews, and decided that this hotel was not bad considering quality and the price (we were looking for rather affordable option).

We were not too much impressed by the hotel.  It is big, location is not bad, close to shopping malls and Ithaca downtown.  Hotel itself is somewhat run down, it needs major repairs.  Sauna did not work, pool was very small and did not look too clean.  There is also an outdoor pool, but it was quit cold at night thus we did not use this pool.  The room was fine, clean, and quite but also run down.

We decided to go to Ithaca downtown for a walk and dinner.  It turned out to be that on Thursdays there is a live concert in the city.  There were many people, the band was very good and entertaining, people were dancing and there was such a nice and friendly vibe in the air.  Downtown Ithaca is very artistic; lots of coffee places and interesting stores.

We had dinner at Kilpatricks Publick House (130 E Seneca St, Ithaca, NY 14850, USA).  It is an authentic Irish place with good food and very friendly staff.  They are kids friendly.  It is very close to Ithaca’s downtown.

We planned to visit 2 big parks today:  R H Treman and Buttermilk Falls State Parks.  I honestly did not know much about this parks, and even though I planned to visit them both I was hesitant. I found out about those parks while reading reviews on the internet and researching suggestions of places to visit around Ithaca.

We were so happy that we unexpectedly visited those parks.  Both parks are beautiful and definitely should be on anybody’s list of places to visit while exploring Finger Lakes. 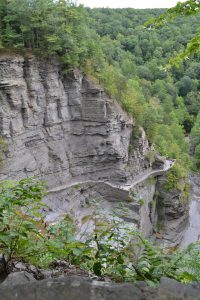 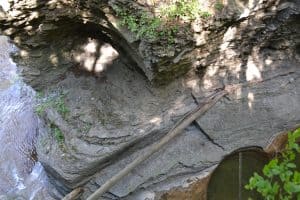 Robert H. Treman Falls State Park is located along State Route 327, just west of state routes 13, 34, and 96. The park offers a pool, picnic tables, playing fields, hiking and camping. R H Treman park has unique gorge trail called Enfield Glen.  There are as many as 15 OR 12 waterfalls along the trail including a 115-foot-tall (35 m), multi-tiered cascading waterfall called Lucifer waterfall.  There is also a  natural swimming pool that is located at the easternmost waterfall, known as Lower Falls.  We arrived around 11 am and there was a sign at the entrance of the park stating that swimming area closest to the fall was closed due limited visibility.  However, the area was opened in about an hour and people enjoyed swimming right next to falls.  The water is very cold but it did not stop even small children. 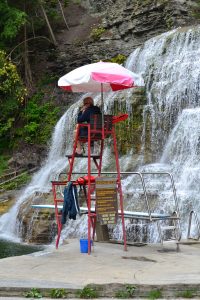 If you park at Lower falls, then hiking the Gorge trail could be quite challenging as there are a lot of stairs to climb up.  As one of the friendly hikers said “Go up as high as you can, and when you feel you’ve reached the sky, then you have around 100 steps more”.  However, take your time, and your effort will be rewarded with stunning and breathtaking view of the falls. 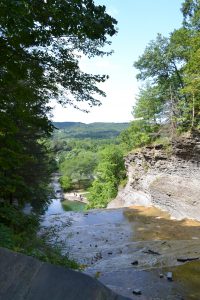 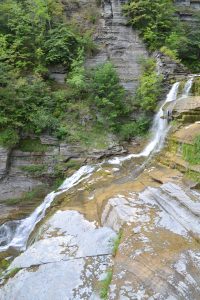 In the upper section of the park you can visit Old Mill that was restored in mid-1920s.    This water-powered mill was built in 1839 and produced corn and wheat flour until 1917.   It is an interesting place to visit and learn about history and people who lived there at the time. 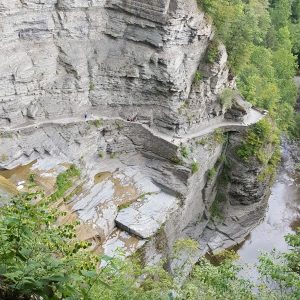 After spending about 3 hours in R H Treman Park we headed to Buttermilk Falls Park.  I think this was the most beautiful, amazing and peaceful park out of all parks we visited. 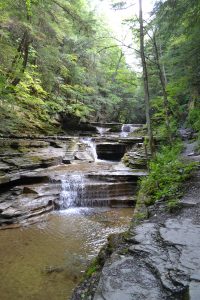 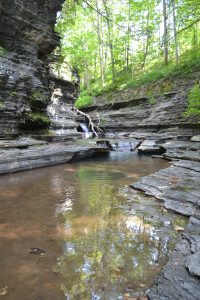 Buttermilk Falls Park derives its name from  Buttermilk Creek.  There are five trails in the park, but the Gorge trail is the most scenic and goes along the gorge; there are many water pools, waterfalls and natural stone sculptures along the trail.  There is a swimming area in the natural pool at the bottom of Buttermilk Falls, however, it was not open when we visited the falls. 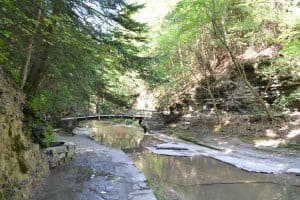 The Gorge trail is not hard, I would rank it 6 out of 10 for difficulty, it is not very steep but it does contain stairs.  I would say it was the most scenic and peaceful place out of all parks.  I would imagine it to be the perfect yoga or meditation retreat.  There are many water pools beautifully carved into stones.  The trail is safe to walk on as there are stone slabs along the trail. 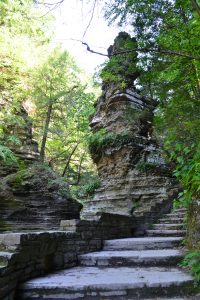 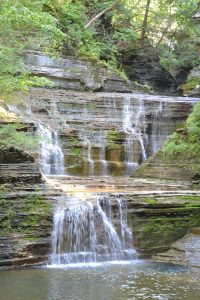 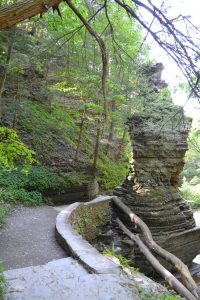 We decided to start driving back home the following day.  However, I really wanted to see Cornell University, drive around and take few pictures of the place.  Thus we agreed to explore the University in the first half of the day and head back home after. 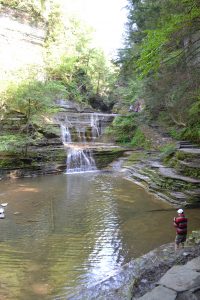 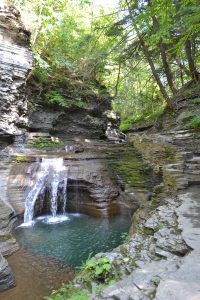